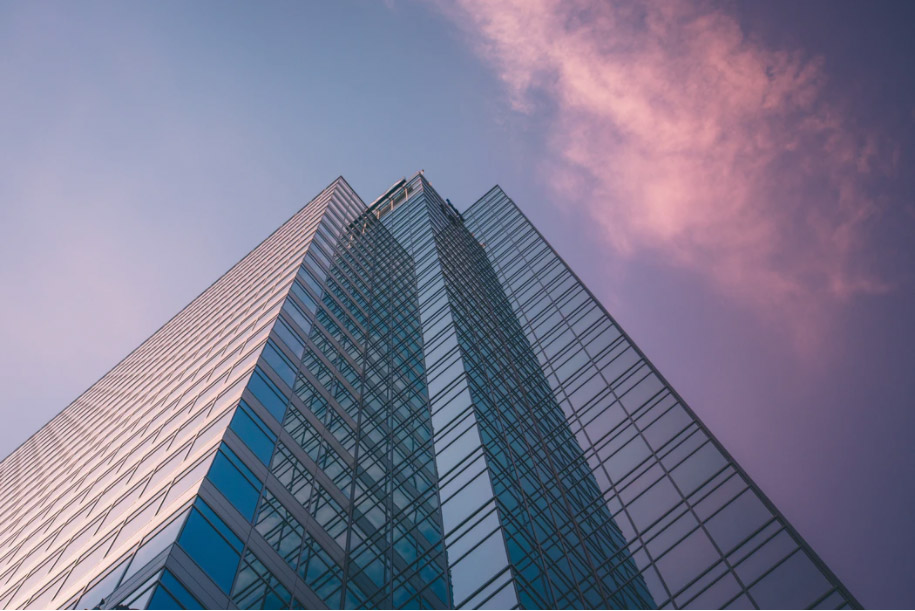 Just over a decade ago, a booming Phoenix market experienced a confluence of trends—rampant overbuilding, spiking unemployment, a national economic crisis, and a near halt in population growth. One of the biggest commercial real estate downturns in the region’s history soon followed. Ten years later, however, the picture was quite different. Prior to the COVID-19 outbreak through the first quarter of 2020, Phoenix multifamily metrics were solid and supported by some of the strongest employment and household growth in the nation. In 2019, Phoenix added more than 82,000 new jobs (a 3.3% increase), the second highest job growth in the country1 The economy today is much more diverse than it was ten years ago during the last downturn. Workers can now choose among a variety of corporate, financial, education, and tech employers, while enjoying a lower cost of living than their peers in other metropolitan areas. Ultimately, Phoenix is better positioned than it was a decade ago; the Phoenix of today is grounded in a broader and more sustainable mix of favorable long-term market conditions. These characteristics, coupled with the region’s year-round sunshine, have made Phoenix an attractive place to live for residents of all ages. While Phoenix is not immune to the impacts of the current COVID-19 pandemic, its unique trends in housing—like a strong “built-to-rent” sector and a rising cost of home ownership— create long-term prospects for multifamily growth.

Before the 2009 recession, construction, real estate, and retail largely powered the Phoenix economy. Today, the roster of top employers also includes leading names in financial and business services, healthcare, and manufacturing sectors, such as Wells Fargo, USAA, Allstate, Nike, and Mayo Clinic, plus new entrants like Grand Canyon University into an already-strong education sector. The area is increasingly seeing firms moving in from California, attracted to the region’s lower costs. The tech sector is expanding its foothold as well, from Microsoft data centers in the cities of El Mirage and Goodyear to various startups in Scottsdale. Companies such as DoorDash, Opendoor, and Norton LifeLock (formerly Symantec) announced significant expansions in Phoenix in 2019. This economic growth has spurred the emergence of vibrant communities across the metropolitan area. In Chandler, where 12,000 Intel employees work, the downtown is becoming more modern, walkable, and rich with experiences and amenities. In Mesa, employees at companies like DoorDash and a billion-dollar Google data center have a growing array of luxury housing options to choose from, like the “green” Aviva in the East Valley and the $75 million mixed-use Palladium GRID downtown. And in Gilbert, residential development has gone hand in hand with commerce; roughly 1.5 million square feet of retail development was added from 2015-2019.

Even downtown Phoenix, historically known as a place where the streets roll up at sundown, has become a vibrant center of shopping, recreation, and urban living. In fact, Adeline, a luxury high-rise at the sports- and shopping-adjacent Collier Center, is being constructed on one of the last parcels of land available for development in downtown Phoenix. As opportunities downtown and at the luxury end of the spectrum level off, developers are turning to value-add opportunities like Arrowhead Summit, a garden-style, Class B property in neighboring Glendale. Overall, new completions slightly outpaced demand in 2019; however, apartment vacancy rates remained near a 20-year low level of 6.5% in the first quarter of 20202. Low vacancy rates drove rents up by 7.8% over the past year, ending the year3 at $1,148 per unit on average4 Even though Phoenix leads the country in rent growth, monthly rents are $230 below the national norm. Rent growth remained robust at 4.4% year-over-year in the first quarter of 2020.

The market will not be without challenges in the near-term, including the international Coronavirus pandemic and a substantial construction pipeline with units under construction at year-end down by only 10% from the market’s 2019 peak. While apartment vacancy rates here and throughout the country are likely to rise over the next year due to financial impacts of COVID-19, the Phoenix market will continue to offer lower living and business costs as compared to nearby high-cost California cities which are already supplying a large influx of businesses, workers, and retirees. Over the long run, these factors, combined with a growing educated labor base, will continue to support demand for the Phoenix area.

1US Bureau of Labor Statistics

For many Phoenix residents, however, rent growth presents an affordability challenge. As of December 2019, the average wage worker in Arizona earned $17 an hour, yet one must earn at least $20 an hour in order to comfortably afford an average market-rate two-bedroom apartment. Projects like Monroe Gardens Apartments have emerged to meet the affordability needs of the fast-growing community. This redevelopment of an older property in downtown Phoenix into energy-efficient affordable housing is part of HUD’s Rental Assistance Demonstration program. However, scarcity of affordable options remains an issue. Only about 2,000 affordable housing units have been built statewide to fill an estimated need of 165,000 units. As in other parts of the United States, Phoenix has experienced steep increases in construction, labor, and land costs, and developers of affordable housing can’t cover these expenses with increased rents. Fortunately, a variety of government-assisted programs are available to facilitate and accelerate financing. Arrowhead Summit, for example, used Freddie Mac’s Mod-Rehab Program, which provides capital for the renovation and repositioning of multifamily assets at very competitive rates. HUD also has programs that insure loans for new construction or substantial rehabilitation and streamline FHA mortgage insurance applications. FHA financing, compared dollar-for-dollar with conventional construction financing, can yield twice the number of affordable housing units.

Opportunity zone incentives offer great potential as well. Investors and developers can benefit from lower or deferred capital gains taxes, full tax abatement on any appreciation after the initial investment (without recapture of depreciation for investments held over 10 years), and credits and incentives that lower lending costs. Many developers have been using Opportunity Zones for Class A properties in downtown Phoenix.

“Built-to-rent” housing—contiguous one- and two-story properties that feel like single-family homes—emerged in Phoenix during the Great Recession. At the time, developers rented out the single-family homes they weren’t able to build out and sell. Now this innovative approach to housing has become a growing segment of the market. While this new approach comprises only 5% of homes built, the trend is quickly catching on. As opportunities slowdown in luxury and the urban core, built-to-rent offers many advantages. This garden style of building works well on Phoenix’s flat land and is well-suited to the metropolitan’s outskirts, where land costs are cheaper. Properties appeal to a wide range of renters, including families, millennials, and empty nesters. Amid rising construction costs, the amenities that often resonate most— like a doggie door—can be comparatively affordable to add.

Furthermore, rents generally fall between $850- $1,250, making this style of housing appealing to both renters with tighter budgets and developers looking for rent growth. Built-to-rent is becoming more feasible to develop as well. As the concept takes hold in other parts of the country, such as Charlotte, Atlanta, and Nashville, both government and private lenders have become more comfortable financing such deals. Interest in Phoenix multifamily product has risen over the past cycle as investors recognize the improving job market and higher income renter base. Property sales volumes rose by 30% in 2019, representing nearly $8 billion of sales transactions. $1.3 billion of transactions closed in the first quarter of 2020, down from the brisk pace of 2019, but in line with 2017 to 2018 average pace. The average cap rate of 5.7% in the first quarter remained similar to the rate of the past year1. While the full effects of COVID-19 on the Phoenix market remain to be seen, the city’s healthy marketplace seems well-positioned to weather the short-term pressures that are being faced in cities across the United States as a result of the current pandemic.

“While Phoenix has seen some of the strongest rent growth in the country, apartment rent remains affordable at 16% below the national average. People continue to move to Phoenix for the climate (over 300 days of sunshine), the cost of living and the lifestyle.” Jim Pierson // Managing Director 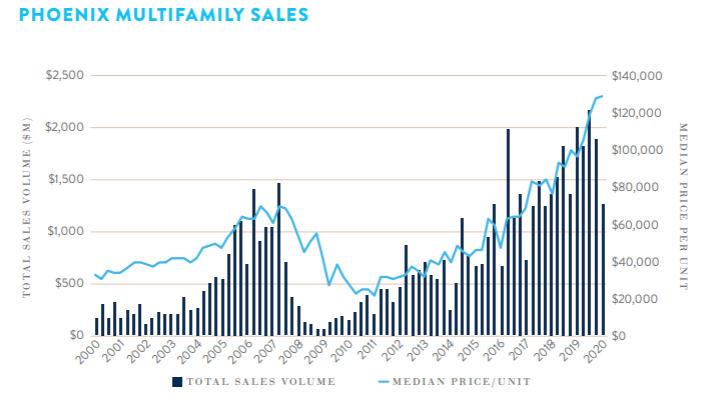