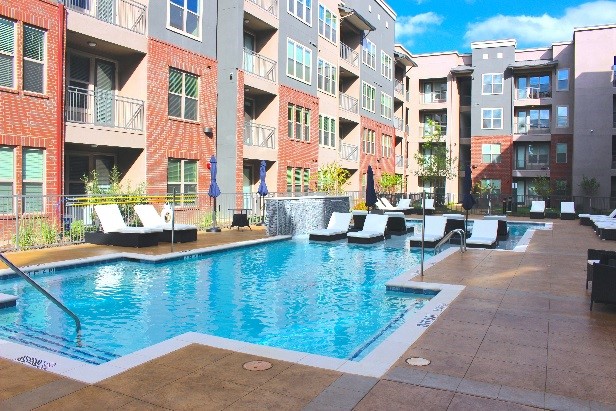 Walker & Dunlop, Inc. (NYSE: WD) (the “Company”) announced today that it arranged a $18,450,000 loan for The Flats at Frankford Station, a Class A, 185-unit, mid-rise apartment building located in Carrollton, Texas, a northern suburb of Dallas. Led by Managing Director, Stuart Wernick, and Loan Officer, Matt Newton, the Company’s team placed the debt with Fannie Mae on behalf of Frankfurt Properties, LLC.

The 10-year loan was structured with five years of interest-only payments and a fixed rate at under four percent. The property qualified for a Green Building Certification, which allowed Walker & Dunlop’s team to leverage discounted pricing, maximize loan proceeds, and achieve an accelerated closing time for the borrower. The refinance includes a cash out component, which will be used to pay off the construction loan.

Mr. Wernick commented, “Frankfurt Properties has been building quality apartment communities in great locations for decades. Although this property had just completed its construction process, we were comfortable proceeding with a new permanent loan before occupancy stabilized due to the strong demand in the market. This was evident by the leasing, which reached over 90 percent in less than six months from receiving its first Certificate of Occupancy. By the time we funded the loan, the property was 100 percent occupied.”

Located on 4.73 acres of land, The Flats at Frankford Station was completed in 2016 and consists of a single, four-story building with an enclosed courtyard where the amenities are located. The property features a putting green, pet spa, and resort-style pool with a gazebo and outdoor kitchen. With one-of-a-kind lake and golf course views, the asset is situated across from Indian Creek Golf Course and is also across the street from the DART Light Rail Station.

For more information on recent deal closings by this Dallas-based team, read the Company’s corporate announcements for SOCO Apartments and Orleans Square Apartments.

The Flats at Frankford Station is just one property in Walker & Dunlop’s rapidly growing portfolio of green qualified properties. Ranking as the #1 DUS® Green Lender for Fannie Mae in 2016, Walker & Dunlop is leading the industry in its efforts to promote and implement green financing programs across the United States. During the first half of 2017, the Company closed $3.8 billion in loans qualifying for green financing through Fannie Mae and Freddie Mac.