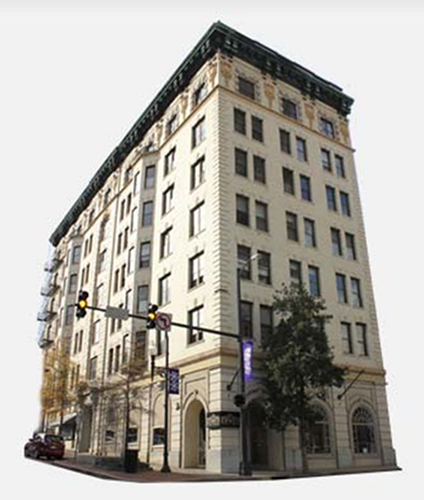 Walker & Dunlop, Inc. announced today that it structured a $4,891,500 construction loan through the United States Department of Housing and Urban Development (HUD) for the revitalization and apartment conversion of the Krise Building. Located in Lynchburg, Virginia, the historic seven-story building will be a mixed-use property for multifamily housing and commercial use.

Built in 1905, the Krise Building is situated within the northwest quadrant, at Main Street and Ninth Street, and rose as the city’s first skyscraper. After the Civil War, downtown Lynchburg began to emerge as the financial and commerce focal point within the city. Today, the city lies at the center of a wider metropolitan area and the building remains as an excellent example of the early 20th century skyscraper design.

Walker & Dunlop’s team, led by Rob Rotach, secured a 40-year, fixed-rate, fully amortizing loan for the borrower, Krise Partners, LLC. Drawing on their expertise with HUD financing, the team secured a construction loan through HUD’s Section 221(d)(4) loan program. The program insures mortgage loans to facilitate the new construction or substantial rehabilitation of multifamily rental or cooperative housing for moderate-income families. Additionally, the property was financed in conjunction with the approval of a 20% Historic Tax Credit of “qualified rehabilitation expenditures” through the Virginia Department of Historic Resources. The team navigated through several Tax Reform changes to the Historic Tax Credit program enacted in 2017 to ensure that the financing would be completed.

“After little luck finding a good financing package in the conventional lending market, we explored HUD options with Rob and his team. This project was small yet complex, and we are grateful for all their conscientious efforts to complete this challenging financing assignment. We look forward to celebrating upon the completion and successful lease-up of the Krise building,” stated Cliff Harrison, managing member of Krise Redevelopment, LLC, an affiliate of Krise Partners, LLC.

Mr. Rotach stated, “The Krise Building is historically known as one of Lynchburg’s most beloved artifacts, and the revitalization of the building will facilitate the preservation of the city’s architectural heritage while refueling economic activity.’

Once complete, the Krise Building property will contain 21 units, with a total net rentable area of 25,766 square feet. The Krise building was formed to resemble a classical column with a distinct base and will maintain its original look and feel, but will undergo substantial rehabilitation and apartment conversion as it was originally designed as an office building. Installation of several green features will include energy-efficient building materials, Energy Start appliances, and efficiency upgrades to all systems.

In 2017, Walker & Dunlop closed over $1.4 billion in HUD origination volume, a 54 percent increase over 2016. Additionally, the company was ranked as the 4th largest HUD lender and the largest HUD servicer in the country.

For additional information on the Company’s financing for revitalization properties, please view some of our recent press releases below:

Walker & Dunlop (NYSE: WD), headquartered in Bethesda, Maryland, is one of the largest commercial real estate services and finance companies in the United States providing financing and investment sales to owners of multifamily and commercial properties. Walker & Dunlop, which is included in the S&P SmallCap 600 Index, has over 650 professionals in 29 offices across the nation with an unyielding commitment to client satisfaction.